Why is Commodity Farming Important to Farmers and Consumers Alike? 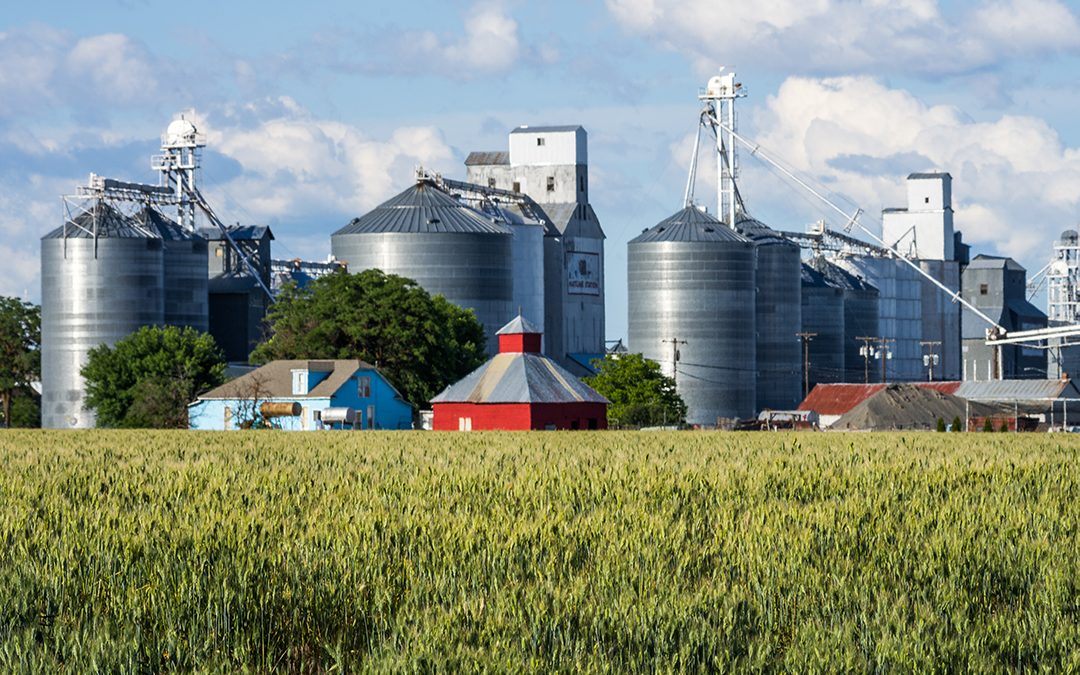 When you walk up and down the aisles in the grocery store, how often do you think about commodity farming? Probably never. Right now, you may be thinking, “what the heck is commodity farming? Do I care? I simply want to buy food at the grocery store!” As you shop for groceries, you have likely seen a label that says “organic,” “natural” or maybe even one that reads “Sustainable” but how is the package contents better or worse than one grown as a commodity crop?

What is Commodity Agriculture?

Commodity crops are any crop that gets traded. Simple as that. The big three commodity crops which consume most of the land farmed in North America are corn, soybean and wheat. Cotton and rice are other crops high on the list of primary commodities, but since we don’t grow them in Canada or Ontario, I will focus more on the big three.

In 2018, there were 6 million acres of corn, wheat and soybeans grown in Ontario. Just imagine what the settlers of our region must have seen when they arrived here. Lush wooded areas similar to the images we see in the modern day Amazon forest, numerous plants that allowed for biodiversity throughout the region.

Today, there are three primary plants grown every year: corn, soybeans and wheat. That is 2% of the land area in Ontario and a large portion of the land between Windsor and Ottawa, where most of the population of Ontario resides.

The graphic below shows volume produced of the big three grains in Ontario in 2018. 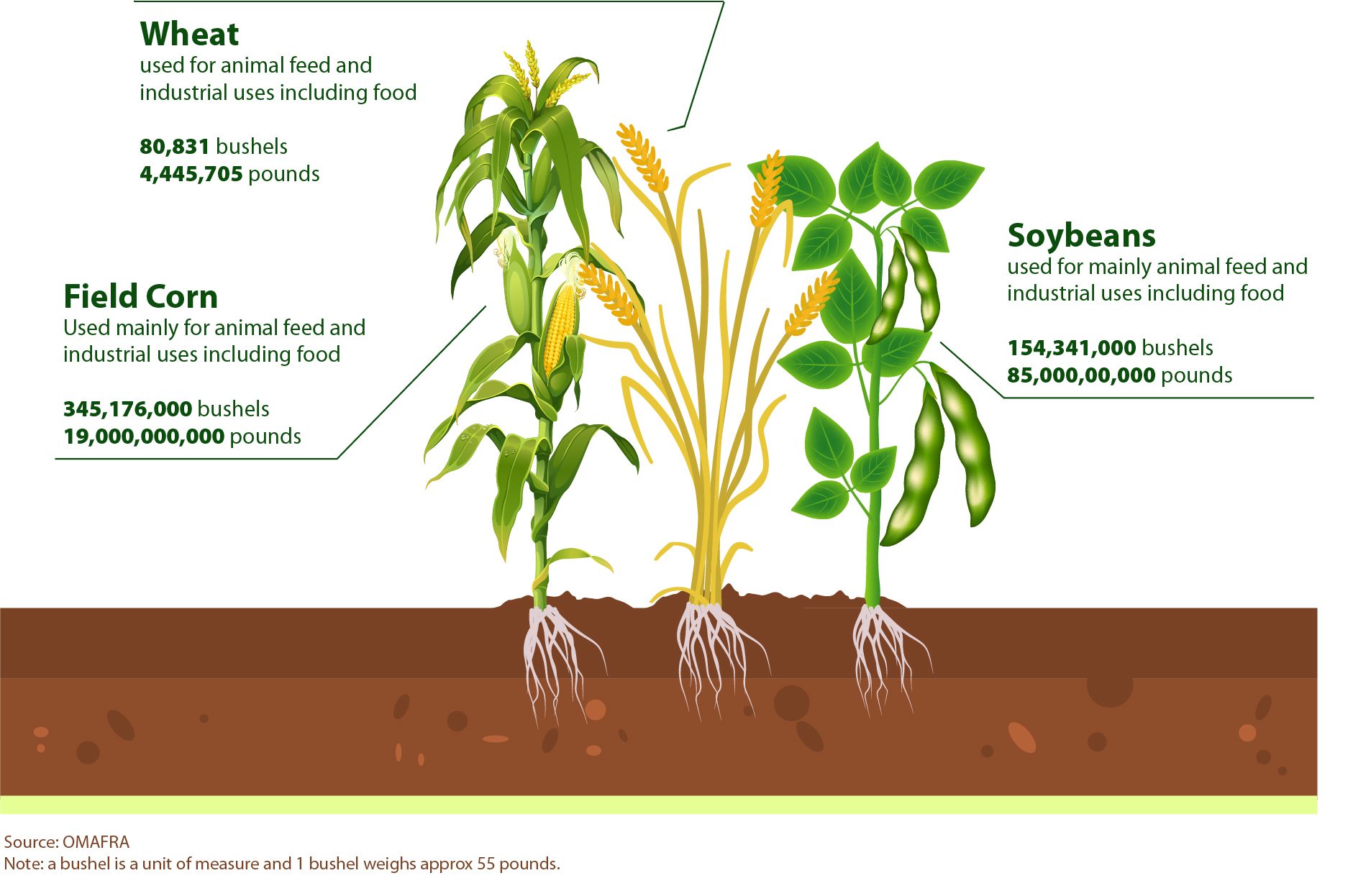 Consumers hear words like GMO, monoculture, industrial farming, or factory farming on TV or in the documentary’s all the time these days because they are functions of a commodity farming system that cause concern from eaters. Many of these words spoken with negative implications. Farmers may view these terms as advancements to agriculture or tools in their tool kit to produce the volumes food companies demand eaters. Remember, the industrial food system was designed to create the cheap food we consumers desired. So your purchases at the grocery store matters.

Losing Sight of the Goal to Produce More at Lower Costs

If our primary goal were to grow a minimal number of crops, farmers from previous generations would be amazed at the production levels achieved in 2018. Even more astounding is the small number of people it takes to produce roughly 6 million bushels of grain.

The connection many people have failed to make is when we see a consumable item for sale at $1.99 versus the same product NOT made with industrialized grains for $4.20, which one do we generally chose? Be honest.

Commodity farming has produced food that has on the surface put more money back in the pockets of consumers. While we should applaud some results of the industrial food system, other results should cause concern and are they the reasons we need as a society and a finite planet? 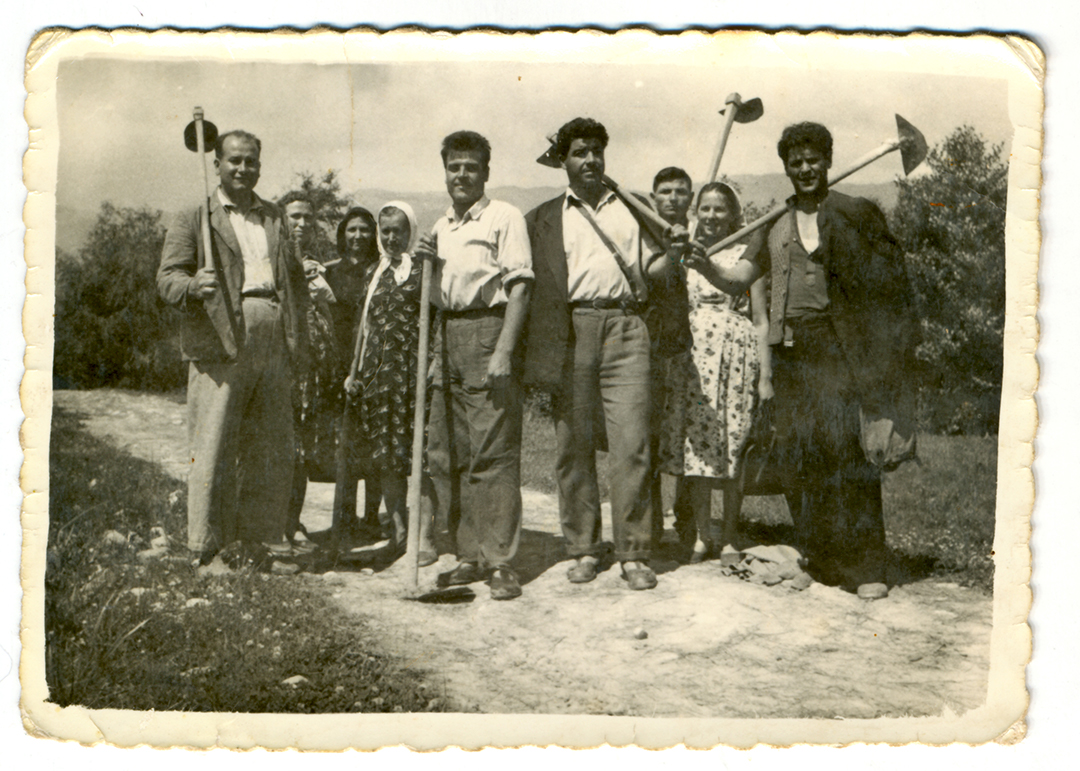 How did Commodity farming start?

Commodity pricing started in an era where farmers needed support around the time of the Great Depression. President Roosevelt had great respect for farmers, and it showed in the comments he made about farming and farmers.

“Prosperous farmers mean more employment, more prosperity for the workers and the businessmen of every industrial area of the whole” — Franklin D Roosevelt

The Beginning of Farm Commodity Programs

He created the farm commodity programs as they are currently known. Programs designed to help farmers with controlling the supply, thus increasing the price for their crops. Does the previous quote from President Roosevelt sound like a person who wanted to produce so much of one plant that it became undifferentiated? 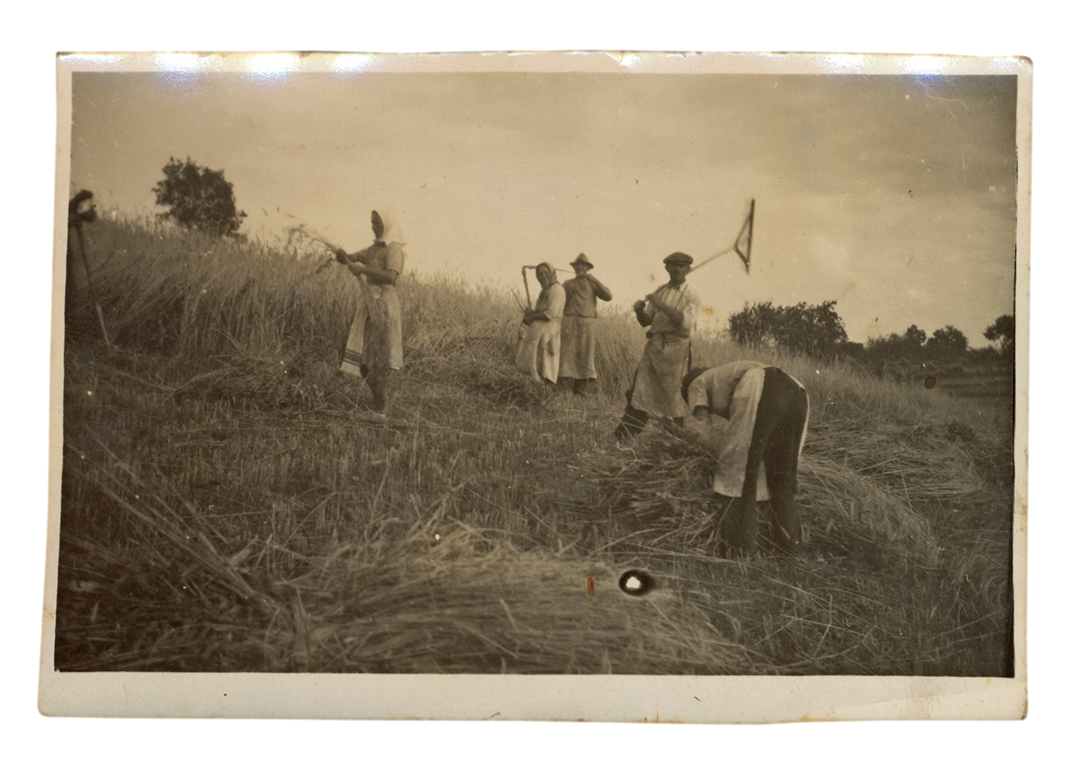 However, in 2019, commodity farming has heavily influenced food. At the point that virtually every product you touch in the grocery has some type of commodity crop in it or made by it. Heck, we even make ethanol out of corn that runs our cars!

The major challenge for commodity farming is the volume or in the farmer’s world: yield. A term that refers to how much grain a plant will produce. This is essential to the grower because this is how the farmer gets paid. The more wheat, corn or soybeans, the more the farmer generates a profit.

This allows farmers to provide for their families, earn an income that will enable them to send their children to college or university, move to a bigger home or save so they can retire. Just like everyone else, farmers want to improve on the life our parents gave us. 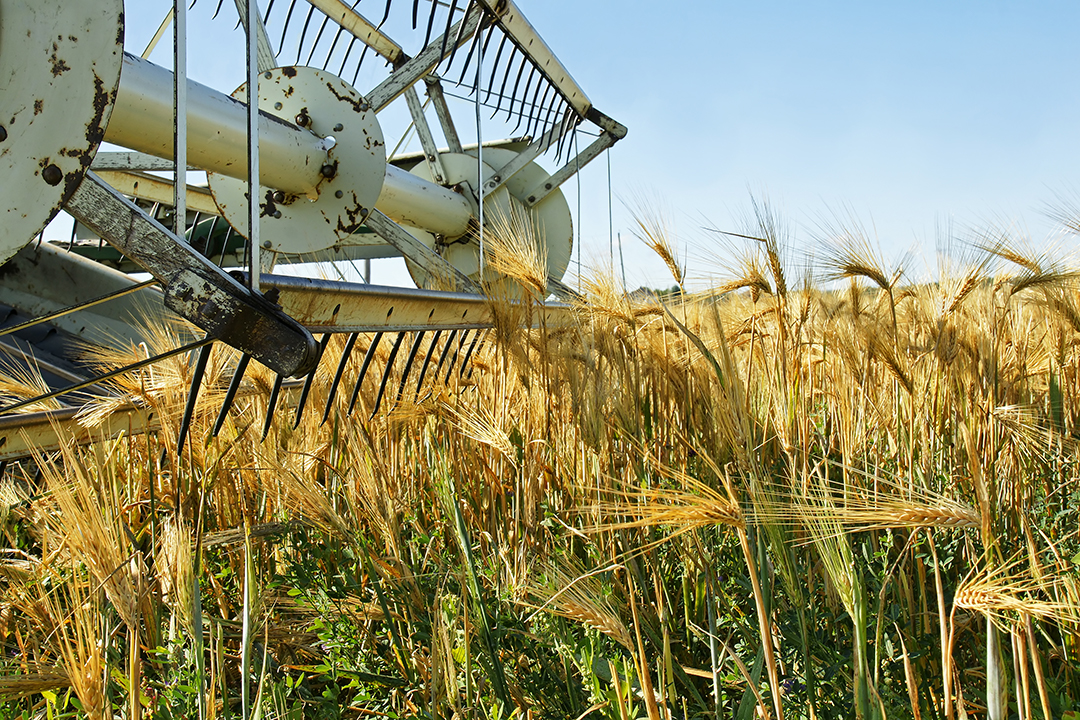 So what’s the issue with Commodity Farming?

Unlike organic agriculture or regenerative farming; commodity farming didn’t start with a set of guiding principles or objectives. It began as government legislation put into place by FDR to help farmers control their prices in a very volatile marketplace where they had very little control. The goal of this thinking by the former President was to build collective wealth. The goal was accomplished but was it at the expense of society, farmers and rural communities.

What I currently see occurring in most of rural Ontario is old, dilapidated homes, and empty schools. Young people are moving to big cities to take advantage of economic situations. There are fewer rural doctors to care for sick or dying people in non-urban communities. All results from society wanting cheaper food, as efficiency and economies of scale, were falsely sold to farmers as solutions to their challenge of getting paid adequately for producing our food.

Is Commodity Farming the Solution?

So is commodity farming the solution to our future food needs? Not sure! But I hope that the next time you enter a grocery store or go out to eat at a restaurant, you think about commodity farming and how it impacts your body, your life and our environment. Start questioning with not only our critical thinking but also our wallets.

One of the reasons we created the annual Regenerate – Heritage Grain weekend was to encourage consumers, chefs and farmers to think about this very topic. For me, it personally started six years ago when I attended a celebration dinner put on by a farming cooperative in Fairbury, IL. At this dinner, big-name chefs had uniquely created dishes that showcased the farmers and their products from the cooperative. The event included chefs like Rick Bayless from Frontera, Paul Kahn from The Publican, Ken Myska & Stu Hummel of Epiphany farms, and Stephanie Izard from Girl and the Goat.

Off in the corner, there was a table with a young baker with a lot of tattoos and piercings and his table was packed with people. He had baskets of bread with two mason jars sitting in front. Greg was talking to people who were listening very intently to what he had to say. He explained that the jar where the starter dough was not doing anything was “commodity wheat,” and the bubbling jar which had more than twice the size of the other, he referred to as “non-commodity wheat” or heritage wheat.

What was in the jars was something called sourdough starter. Greg Wade explained the difference between the two as a baker. One jar was full of life, growing and expanding through fermentation. The other was less active with very few bubbles. The smell, the “non-commodity” wheat smelled rich and full-bodied, while the commodity starter had a foul odour I can’t even describe. When you open a can of something that it is just off and you know something isn’t right. That was the smell I remember and still remember it to this day.

In this one simple example, Greg showed consumers the difference between commodity wheat and non-commodity wheat. One made with grain grown not as a commodity but for food, as intended. These experiences happen throughout the Grain weekend in London, Ontario, to show why commodity grains are not suitable for chefs to use in the creation of their dishes and ultimately not beneficial for consumers to eat.

As chefs desire, flavour, taste and ingredients that satisfy consumers appetite. Greg Wade will be back fresh off winning the James Beard Award for baking in the United States to lead bread camp and look at this topic as part of the experience. Other events will run that weekend that will continue to explore why commodity crops don’t hold much value for creating food because they lack flavour, taste and complexity.

What to explore more why you should think about commodity farming, join us Sept 27, 28 and 29, 2019 to taste the difference. Details to come!